Heraldry - A Guide to Your Coat of Arms

INTRODUCTION
Coats of Arms were a means by which princes and knights from the 12th Century onwards could identify one another on the battlefield and in tournaments.
As the use of arms spread, the designs necessarily became more elaborate. Eventually a Coat of Arms became a matter of great family pride and prestige, awarded to knights and tradesmen for services to a sovereign.
Many thousands of designs were registered, each one different from the rest in each country and each one symbolic of the family it represented. You may or may not be related to the early namesake represented in your Coat of Arms (no genealogical relationship is intended or implied in supplying a Coat of Arms for decoration). It is not uncommon for one surname to have different Coats of Arms applicable to it, as many unrelated of the same name may have been awarded arms.
The decorative use of Coats of Arms is officially encouraged because it "inspires pride within the family" and offers a sense of medieval pride to the home.
DESCRIPTION
A Coat of Arms is made up of several components. 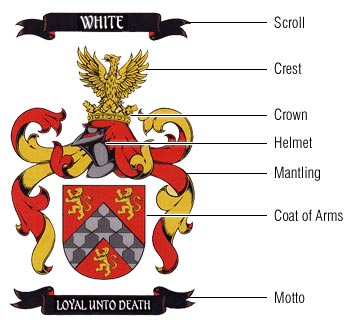 The scroll is used to display the surname on which the Coat of Arms is based.

The crest was mounted on the helmet and was an essential part of the insignia in most countries, though rare in France, Spain and Italy.

This was simply to keep the mantle in place. Some Coats of Arms show a wreath instead of a crown, although this has no special significance.

Worn by the knight for protection during battles.

This was worn over the knights helmet and served two main functions: firstly, the colours formed part of the overall identity as depicted in the Coat of Arms, and secondly, it helped to keep the metal armour cool in hot weather.

This was displayed on the shield, surcoat and banner of the knight. Each Coat of Arms was protected by law and was borne with legitimate pride.

Many families had a family motto which may have been recorded as part of the arms.

BLAZON
Heralds of the middle ages developed their own terminology for describing Coats of Arms. In heraldry this is called a "Blazon" and every single Coat of Arms has its own unique Blazon. It enables any Coat of Arms to be reproduced with great accuracy, but without inhibiting artistic expression.
Dexter or Sinister?
The left and right sides of the fields are called DEXTER (right) and SINISTER (left). Usually all of the charges and ordinaries point 'Dexter', the same direction as the helmet faces, unless otherwise stated in the Blazon. You will notice that dexter is left as you look at the shield, but is in fact right, as if you were holding the shield on your arm!
ORDINARIES & ACCIDENTALS
An 'ordinary' is one of a class of charges, typically a figure of simple geometric form, as seen here:

Each of these designs can then be subject to any number of "accidentals":

The result of this can be seen in the examples below:

Some of the most common poses are described heraldically as:

There are many hundreds of different charges which can be used in coats of armour. These include such things as images of people, tools of various trades, weapons, wild animals, mythological monsters, celestial icons, flowers and trees, castles and towers, food, household items, birds and fish, and ships, to name just a few.

The importance of these charges was significant in that they would often symbolize the trade, hopes and ambitions of the individual for whom the arms were created.

COLOURS
In heraldry, the colours, or "tinctures", used in coat armour are described in the following way:

There is also a 'fur' called 'ERMINE':